You are here: Home / Lifestyle / How to Fight Ageing by Drinking Red Wine

Ageing is something we would all like to avoid.

It’s nothing startling or new when I say “growing old is unavoidable”, but growing up is something we can stop if we want to.

Of course, there is a lot of truth in the whole “young at heart” ideology as well. Ogden Nash nailed it when he said, “You are only young once, but can stay immature indefinitely.” 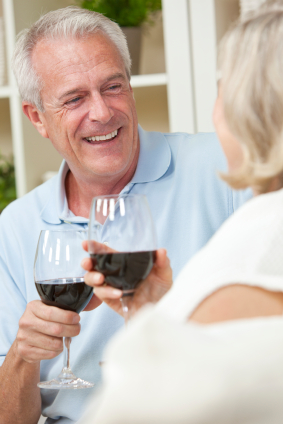 If you feel young and act even younger and don’t treat your body like it was rented from Hertz, you will be less plagued by illnesses and ailments that many older other people seem to struggle with a big percentage of the time.

Find out now how this latest research shows why Resveratrol has such great promise in the fight against ageing for over 50’s.

Believe that just because you are over 50 you are no longer able to work out or do anything meaningful, and you will soon be a decrepit old wreck ready for the scrap heap. I know, I see them every day.

But, look after yourself and your body, and you will continue to stay young physically and enjoy the fruits of your ageing years.

Is It True That Resveratrol Does Not Work?

One thing many of us have known for a long time is that Resveratrol is supposed to be really good in terms of keeping us young and youthful.

Resveratrol is found in red wine (but also in peanut butter, dark chocolate and blueberries) and it is believed that the reason why the French has so few instances of heart disease and cancer is because of their high red wine consumption.

It was recently reported that if we over 50s take Resveratrol, it blocks some of the benefits gained from working out. The world read in horror, but you will be happy to know it is actually very incomplete research.

First of all, it was only tested in a very select group of people (men around 65), and it was tested on those who took quite a high dosage compared to what you would get from drinking wine.

So, now that the panic is over, what sort of benefits can you actually expect from drinking a few glasses of red every day (or eating peanut butter sandwiches, snacking on dark chocolate and getting healthy on blueberries of course)?

The Benefits of Resveratrol for anti-ageing

There are various benefits to using Resveratrol. The main one has to be its anti-ageing properties, something that has now been conclusively proven. In fact, it seems that the study mentioned above was basically flawed and that the results were nothing but a fluke (well that’s good news).

A study was recently conducted on laboratory mice and it was found that mice who did take Resveratrol would have twice as much endurance as those who didn’t. Not just that, they did not fall victim to the various problems obesity and ageing tend to bring with them.

Furthermore, lifespan has been extended, which has been demonstrated to be accurate in not just mice, but also flies, yeast, bees and nematodes.

How Resveratrol Works its Magic

It seems that Resveratrol works by stimulating our body’s SIRT-1 production.

SIRT-1 blocks diseases because it speeds up the mitochondria, which are the energy production cells in our body.

Interestingly, various drugs on the market actually slow down or block SIRT-1, making Resveratrol pretty unique. And all of that can be accessed just by drinking a few glasses of wine! It is believed that this is the most significant scientific discovery that has been made in years.

It has long been known that the French must have had some sort of secret that was keeping them so healthy and the link to red wine (and garlic to some degree) has been speculated on for a long time.

This new evidence seems to prove it consistently.

Funnily enough, although doctors will always advise not to consume alcohol, it seems that the Resveratrol works best in red wine, better than it does were you to simply consume red grapes every day.

The “joie de vivre” that the French seem to have, this idea that red wine isn’t even alcohol (the French never count the glasses of red they have towards their daily consumption) seems to be exactly why they are so incredibly healthy.

The French are not necessarily known for their high levels of physical activity, they are not like the Dutch, for instance, who cycle everywhere. However, they are also certainly not hampered by any physical activity they do engage in.

Quite the contrary and this is yet another thing that we have Resveratrol to thank for. It seems to be very simple, one or two glasses of red wine a night is going to do you the world of good.

I’ll drink to that!

Discover How Resveratrol May Fight Aging

Hello.......I’m John Falkinder. I am an energetic, fit and healthy baby boomer who has currently embarked on a journey of reinvention; it is all about ‘active ageing’ for.... END_OF_DOCUMENT_TOKEN_TO_BE_REPLACED