You are here: Home / Health / Evidence Reveals 5 Easy Ways You Can Gain an Extra 7.2 Years in Life Expectancy…….

………..just by doing a little bit of regular moderate exercise.

Regardless of age, most people I know have no trouble coming up with more than one ‘valid’ reason (excuse) why they don’t exercise – or keep on top of their diet for that matter too. 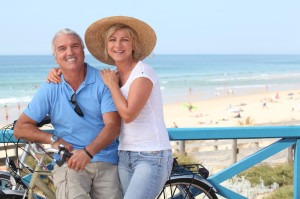 We all know the importance of exercise and diet to our physical and mental wellbeing but just how much exercise is enough. In the Harvard Gazette I discovered this: Physical activity and gain in life expectancy — quantified.

Maybe you are just too tired from the hectic schedule of modern day living or you don’t have the time to go to the gym. Or, perhaps you simply aren’t motivated enough to lace up your sports shoes and break into a healthy sweat.

Whatever your motive for not exercising, there are plenty of reasons to change your attitude and make a commitment to regular physical activity. In the long run, moderate physical activity will have a hugely positive impact on your life and your longevity.

The extra years regular exercise can add to your life is well documented and is covered in this article which I believe is more than worth a couple of extra minutes of your time to read. Hopefully it will help motivate you to invest a small part of your day in an ongoing active ageing program: Every Minute of Exercise Could Lengthen Your Life Seven Minutes.

Now let’s learn about five ways exercise can improve your life (and yes, there are many more ways – just check some of the other articles on this site).

Exercise and Improvements in Your Mood

If you are feeling anxious or depressed, exercise is a great way to improve your mood and general well-being.

Authors of a study published in a 2013 edition of the journal Social Psychiatry and Psychiatric Epidemiology analyzed the relationship between physical activity and levels of anxiety and depression in both men and women.

A second study, published in 2012 in the American Journal of Epidemiology, found that people who were physically active were less likely to become unhappy during a 2 year and a 4 year period.

The Relationship between Exercise and Stress

Exercise will improve your reaction to stress. Authors of a review published in a 2012 edition of the International Journal of Exercise Science analyzed the results of 33 different studies concerned with the relationship between exercise and stress response.

Their results indicated that individuals who completed an exercise program were less reactive to stress than individuals in a control group were.

A 2014 study published in the journal Health Promotion Practice found that college students who were part of a physical activity class experienced lower levels of stress and burnout at the end of the semester. In fact, students in the physical activity class had lower levels of stress and burnout than did students in a stress management class!

It is no secret that exercise can aid weight loss, but you may be surprised by how a seemingly small amount of exercise can have an impact on your weight.

A study published in 2012 in the International Journal of Obesity also showed a relationship between physical activity and weight. Study participants were a group of over 5,000 healthy men with an average age of 65 years. Men who met the Institute of Medicine’s guidelines for exercise were less likely to gain weight than were men who exercised less than the recommended amount.

Regular exercise can reduce risk factors associated with heart disease. Researchers for a study published in a 2013 edition of the journal Einstein analyzed the impact of exercise on 16 sedentary patients with metabolic syndrome. After 12 weeks of walking three days per week for 40 to 50 minutes, the patients had lower blood pressure levels and higher levels of healthy HDL-cholesterol.

A second study, published in 2012 in Medicine & Science in Sports & Exercise, found that people who engaged in moderate to vigorous exercise at least three times per week were less likely to die from heart disease. The regular exercisers also had lower levels of inflammation, which is a contributor to heart disease.

The Impact of Exercise on the Brain

Exercise may actually make you smarter. A study published in a 2014 edition of the journal Alzheimer Disease & Associated Disorders found that individuals who were more physically active performed better on memory tasks and visuospatial tasks.

A second study on cognitive functioning was published in 2013 in the journal Education & Health. This study analyzed the impact of exercise on college students and found that those who completed high and moderate levels of physical activity performed better on tests of attention and cognitive functioning than those who engaged in low levels of physical activity.

Improvement in cognitive functioning is just one of several benefits provided by regular exercise.

It is clear and universally accepted that regular physical activity can also improve mood, reduce stress, prevent weight gain and lower the risk factors associated with heart disease. It is clear exercise can have a positive impact on your life, and the benefits associated with regular exercise are certainly worth your time and effort.

Hello.......I’m John Falkinder. I am an energetic, fit and healthy baby boomer who has currently embarked on a journey of reinvention; it is all about ‘active ageing’ for.... END_OF_DOCUMENT_TOKEN_TO_BE_REPLACED